What could you accomplish in 24 hours? How about 24 hours spread over a couple of months? 24 hours all for yourself. Would you read a book? Would you learn how to cook? Brush up on your piano playing? Get in shape?

Since the beginning of the school year in September til now, my kids have spent over 24 hours each in the dayroom or the library while their classroom has been occupied by a catechism teacher. They haven’t had English for a month now because their English teacher is out sick. Those facts are not related, but you know, I’m just saying. You can learn a lot in 24 hours…or nothing at all.

I know that when my mother calls early morning here (middle of the night there) that either it snowed a lot and she can’t wait to tell me about it or somebody died. I saw on the news that it’s been snowing there in the northeast so when the phone rang…

I cannot believe we have lost another family member to heroin overdose. That’s two in the last 6 months. Another 1st cousin. We just saw him in April.

He visited my parents the day he overdosed. My mother thought he was coming down with the flu. He had just started a new job where he worked outside in the cold. My parents were worried about him.

Heroin is for other people – those kind of people. Not us. Not normal folks like us. My family is as run of the mill as it gets. Kind of a big family, weddings, funerals, family reunions, family newsletters, the whole shebang.

Are you in the mood for a little patriotism po polsku?
I don’t mean this kind….by Marta Frej. 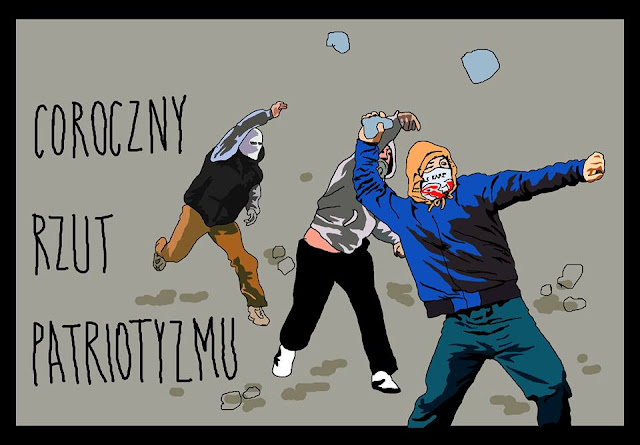 I mean this kind…by Lizzie Lou. 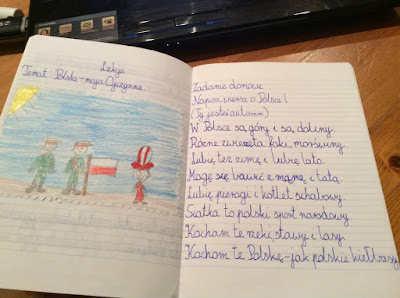 Patriotism in the eyes of our 8-year-old daughter, represented by the Polish flag, two soldiers, and what I thought was the cat in the hat but turns out to be a kibic (sports fan). 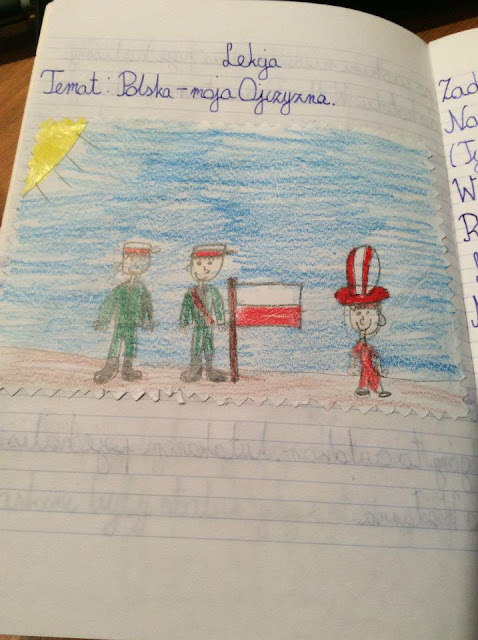 And now the poem. I know it has got a few mistakes (which give it character), but when I read it the first time I laughed so hard, I cried. Enjoy! 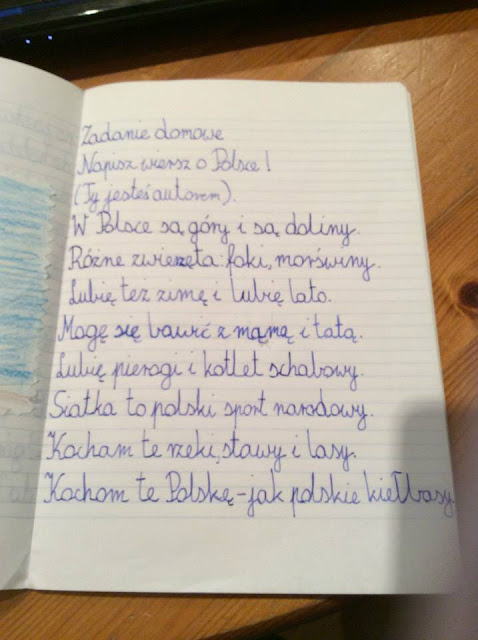 I like to think of myself as a Good Person. Misiu easily fits the mold of a Good Person too. We both try to be Good Role Models to our children. We don’t drink (too much), smoke, take drugs, swear (all the time), drive recklessly, lie (that they know of – I apologize in advance for the whole Santa thing, kids), litter, gossip all the neighbors (in front of them), or ignore someone in need of help. We hold doors open for others, help neighbors with heavy bags, volunteer our time and give to charities.

I am just one small insignificant person. We are just one tiny family unit here on this planet. We cannot help the whole world, but that doesn’t mean we shouldn’t try.

As we drive in the dark and fog each week from the city to the village, we are always on the lookout for wild animals - first to catch the interest of the girls and second to not smash those animals to bits in the grill of the Jeep. Wild animals are not the only thing on our winding forest road that you can smash with your car. Each week we encounter cyclists with and without lights and also pedestrians sometimes walking with the traffic, sometimes against it with no flashlight or reflective clothing. Occasionally, these folks are travelling na podwójny gaz (on double gas), meaning they are under the influence of, most likely, alcohol.

This Friday was not unlike the other Fridays where we have had to swerve at the last second to just miss hitting someone who basically fell in front of or under our car (from the side). I never understood the Polish description padł pod koło samochód (he fell under the tire of the car) until we started to drive this road.

We were driving as we do between Rzędziszowice and Ludgierzowice when we caught a glimpse of a man face down in the ditch on the side of the road. You know, the ditch, that mythical and magical place your mother imagined you were whenever you came home late from anywhere.There were a lot of other cars but nobody stopped. I’d like to think that they didn’t see him. We stopped the car, hit the emergency lights, and explained the situation to kids. Misiu went ahead with his flashlight lit to find the man in the ditch.

While Misiu was looking for the man in the ditch, the whole time I was waiting at the car with the kids saying to myself, “Please don’t be hurt. Please don’t be dead.” In my mother’s story they (whoever “they” are) find you “dead in a ditch”, so I was really hoping this case wasn’t going to prove my mother right. And here I am going to make a confession. It’s just you and me here and I trust you. I was thinking that there is no way I am going to call emergency and say, “We have a man down here on the road between Rzędziszowice and Ludgierzowice”. It is just physically impossible for me to say it. Szczebrzeszyn, no problem, but not Rzędziszowice and Ludgierzowice.

It turned out that the man was not hit by a car. He simply fell in the ditch and could not get out. This is understandable - the ditch was deep and it was completely dark. He was drunk as well, but otherwise uninjured. He could talk and remember where he lived so Misiu decided to walk him home. Did I say walk? It was more like a combination of carrying and dragging, on a dark forest road, with a lot of traffic, in the rain. I was worried about that guy but I was also worried about Misiu walking back along the side of the dark road. You don’t have to be drunk to get hit by a car. Thankfully Misiu came back - cold, wet, stinking of eau de’drunk-man-in-a-ditch, but satisfied that the man was delivered home safe and more or less sound. What’s a little stranger’s stink when you may have just saved his life? The two foxes we saw after that, normally something that would be the highlight of our drive, were anti-climatic. We gave ourselves big mental pats on the back. Misiu even joked that if I really had had to call emergency for that guy I could have dragged him to the next town - Bukowice which I can easily pronounce.

Basking in our own do-goodery, we were in a hurry to get home, at least to wash off the man’s unpleasant odor. Just a winding road, a few more twists and curves and we’d be home to stew a bit more in our good works. That’s what we were thinking when around the next curve, straight in the middle of the road in the darkness, a man sat. He seemed completely unaware that he was in grave danger of becoming a spot on the road. Bathetic meets pathetic, nie? We swerved to the left and thankfully no car was coming from the other direction. Once again we stopped the car, put on the emergency lights, explained the situation to the girls, turned on the flashlight and went –this time both of us. I wasn’t worried about calling emergency. Wierzchowice I can say.

We quickly determined the man to be drunk but conscious, sort of. There were houses around so Misiu went to try to find out who he was and where he lived. I stayed and tried to get the same information from him and coax him over to the side of the road. I was not successful in getting him to safety nor was I able to get a word of sense out of him. He repeatedly called me “Agnieszka niezłośliwy”. He didn’t say niezłośliwa (harmless) which is the feminine form. He said it as if it were a last name, not an estimation of my character. After that he how-how-ed at the barking dogs between random mumbling. Then I asked him if he could make it to the side of the road if I helped him.

For future reference, a 55-kilogram woman cannot move a 100-kilogram man using one hand and carrying a flashlight in the other hand. For additional future reference, physical contact with a drunken man from the middle of the road is ill-advised especially when this man has not recently bathed and has very recently pissed himself, shat himself and vomited all over himself. Would we do it again? Of course we would do it again, and we will always stop to make sure that random stranger is alright. However, having said that I must admit that driving the rest of the way home with your rzygi hand out the window will really reduce your satisfaction in most likely saving a man’s life from the impending log truck rolling down the hill.
Posted by Chris at 3:26 PM 15 comments: