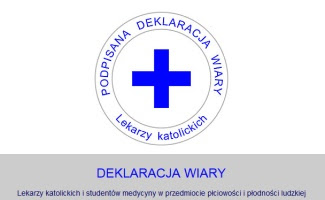 This week approximately 3000 Polish doctors signed a “Declaration of Faith” in which it is stated that they shall treat patients putting god’s law before man’s. By god’s law they mean Christianity, well actually Catholicism.
Whatever, right?
Unfortunately not. These doctors allow their faith to determine patient care, regardless of the faith or well-being of their patients. How does that work out in reality? Does your doctor’s faith really have any influence on your health care? Abortion is already illegal except in the most restricted of cases so let’s set that aside. Sterilization is also illegal as well is euthanasia so we can set those issues aside too. Hospitals aren’t performing executions or lobotomies so what’s the problem? In most cases it involves prescribing birth control, morning-after pills, and recommending and performing pre-natal testing.
So just go to another doctor, right?
Not always. Doctors in Poland are educated by the public university system and most are employed at least partially in the public system as well. Ladies, can you imagine that you go to your OB/GYN and he or she refuses to write you a prescription for birth control tablets? Or sign your order for pre-natal screening? Or prescribe the morning-after pill if you needed it? And your taxes pay for this doctor’s employment.
The worst I have heard of is the doctor whose conscience didn’t allow him to implant the IUD in the public office but who would certainly do it in his private office – his conscience soothed for a mere 1000 zloty.
Aaaaa-men.
Imagine if other professions worked like that…The Immoral Atheist Firefighter! 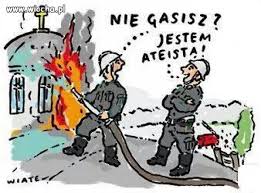 Or a conscientious shop assistant?

And now some humor at the patient’s expense… 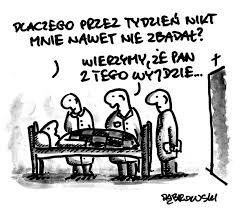 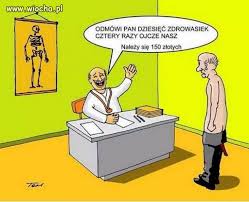 http://www.deklaracja-wiary.pl/ Here you can find the list of doctors who have signed the declaration, in my opinion, a list of doctors to avoid.
Na zdrowie!
Posted by Chris at 5:48 PM 8 comments:

Email ThisBlogThis!Share to TwitterShare to FacebookShare to Pinterest
Labels: religion

Walking is for chumps! 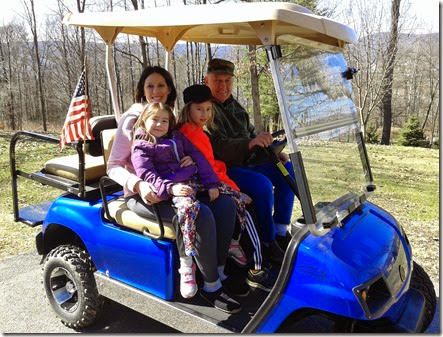 Email ThisBlogThis!Share to TwitterShare to FacebookShare to Pinterest
Labels: kids, my parents

Heaven Is For Real

Recently someone posed me the question I believe made popular by the latest book and film based on a true story, “Heaven Is For Real”. I was asked, “If you knew heaven was for real, wouldn’t you change the way you live?” The poser of the question, a self-proclaimed devout Christian, has a laundry list of things she would change, if only she were sure that heaven existed.
“…wouldn’t you change the way the you live?”
My answer to the question is no. I wouldn’t change the way I live. I don’t know if that speaks highly of me or poorly of her, but there is nothing I would change. I seek to live and love and take care of myself, my family and this planet to the best of my ability. I see those things as gifts, period, not gifts from a god, just gifts that I should appreciate and keep well, not for the reward that may or may not come after.
As I sit here and think about my cousin who died three days ago of a heroin overdose I wonder what I could have done for him and, religion or no religion, why he was not able to cherish his life. It sounds cliché or even cruel now that he is gone, but he had everything going for him before he started taking drugs – a loving family, a beautiful wife, tons of friends, his health, his good looks (it runs in the family, of course), an excellent education, what looked like might be a promising career, the means necessary to make his dreams come true. And now he’s gone, leaving his mother with the memory of the first time she laid eyes on him at his birth and the last time as she found his lifeless body. I cry, but not for me. I cry for them, his mother who has no time to to grieve as she has to keep the family together, for my uncle who hoped the latest prison time and tough love would finally do the trick, for his sister who lost her closest confidante and of course for him – for losing his will to live, his will to fight. I think that the family will never be the same again.
Posted by Chris at 2:59 PM 5 comments:

Email ThisBlogThis!Share to TwitterShare to FacebookShare to Pinterest
Labels: me, religion

We all know I turn a little peculiar when I visit home.

I realized some years ago that my parents don’t know me. I am not even talking about the inside me, my thoughts, my feelings, my beliefs. I am talking about the regular, old outside me - how I spend my time, what my home looks like, what car I drive, what books I read.

To tell the truth, years ago I hid a lot from them. I mean it was easy to do living so far away from them and it’s not as if they visit. Actually I only hid from them the fact that I was seriously ill. I didn’t want to worry them needlessly. I was pretty sick. I only told them years after.

I mean who doesn’t edit what they tell their family? Some people edit out the bad, others play up the good. Now I do neither. I tell it like it is. Too bad nobody is listening.

The realization that my parents don’t know me hit me even harder the last time we visited them -we, meaning me, husband, and children. It was their first time to see me as a parent and after not having seen me for several years including two pregnancies it must have seemed to them that I arrived with an instant family. The parents had trouble getting used to me as a parent and to my girls. I chalked it all up to the fact that we had to get to re-know each other. I did my best to acquaint them. I loaded hundreds of pictures onto my parent’s computer. I showed them the girls’ school on-line. I repeated the stories of their births and all their “firsts”. I got a few polite nods and even one nodding off (my father). Not exactly the reception I was expecting.

As it didn’t go very well last time, I don’t know why I was expecting something different this time, but I was. Last time I figured it was just a matter of getting to know each other. It would all smooth over. This time I figured that my parents just didn’t know how to get to know us. This time I’ve tried my extra best. I’m armed not only with pictures, but also with short films of our home. I’ve got a few nice stories about us on deck. And the girls, well, they are older now and they can speak for themselves. I’ve tried some relaxed conversations. I’ve tried some staged conversations forcing out the stories about swimming lesson successes, A+ book reports, school absences, birthday parties. I have given the grandparents alone time with the grandchildren as well.

Lest you think the flow of information is all in one direction, I have been filling in the children with stories about my parents, where they grew up, went to school, worked, I have shown them where my parents go to church, where they spend time. As well my father has driven them all over showing them his hangouts. I watch as they listen attentively and how they shyly begin to ask questions and then to tell their grandfather something about themselves only to be interrupted by something much more important that their grandfather has to say. I see how their faces crinkle up. I see how they shrug their shoulders. I see how they are giving up. I see myself as a child.

I am not one of those people who expect the world to stop just because I moved away – my goodness I have been away too long for that. I guess I just expect some balance. I know they want to tell me what I have missed out on here, but they forget that they are missing out on our lives there. And they’re not even willing to listen.

I just had an expectation of what it would be like for my children to have grandparents, for my parents to be grandparents to their grandchildren. In my mind’s eye it all looked a little different, not even ideal, just different, closer, less going through the motions, more real connections. Oh lord, I have to stop now because that last sentence just reads like some sappy, late-night commercial for an internet dating site. I warned you that I get peculiar when I visit.
Posted by Chris at 11:37 AM 10 comments: