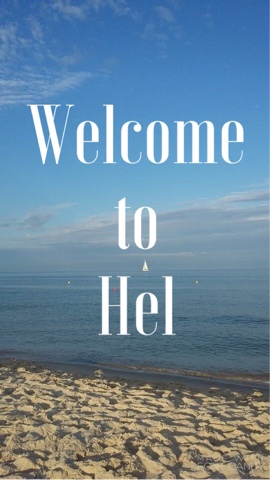 I've been warned all my life that I'd wind up in hell. Who knew it was such a beautiful place. The sand is a lovely white color. The water is clear. The weather changes from minute to minute, but the air is fresh and crisp. We had a good time.

It was our first trip with the girls to the Polish seaside. They really enjoyed the beach, the go-carts, and the waffles with whipped cream. There was a moment of disappointment when they realized that the water was cold. Then they discovered jellyfish in the water, and all was forgotten. The water is cold. The wind is cold. It rains almost every day. Be prepared. You can get sunburnt even on a cloudy day as my red legs can attest to. I was not prepared.

Here was our stanowisko. We didn't have the windbreakers (parawany) which are extremely popular on Polish beaches. I'm not sure if they are popular because they actually do break the wind or if they just appeal to Polish people's love of fencing themselves in or rather fencing others out.

After five minutes on the beach, we were already on a ciocia-basis with our closest neighbor. She requested joining her parawan with our beach blanket to create a more private zone which she defended tooth and nail. Our kids began playing in the sand, and they were lost to us for most of the day.


We let our kids run, jump, swim, sunbathe on the sand, pretty much do whatever they wanted. From some of our closest neighbors I observed a different philosophy of beachgoing. The philosophy of taking kids to beach and not letting them swim. There are two schools of thought apparently- one, it is too hot to swim - the other, it is too cold. The same ideology applies to eating ice cream as well. The next part of this philosophy involves taking frequent breaks with mother sitting on a beach towel, not the sand, never sit on the sand according to this philosophy. Additionally don't walk in the sand because you'll have sand in your shoes. This said to a child already on the beach. Said child stops walking, frozen in the conundrum presented to him by his mother. How can you take a kid to the beach and not let the kid swim I wondered as one mother tortured her child while all other kids were having fun. "Why did you even bring me here?" asks one 10 year old girl. I wanted to ask the same.

Our girls found some like-minded children with normal parents and spent the time being happy and having fun.

I was very happy to be on vacation. Not that I don't like my job. I love it. It is a very people-oriented job though, so it was nice to not have to talk to anyone or listen to anyone or correct anyone. I'm pretty sure Ciocia from the next parawan was trying to get some English lesson out of me for her grandson, but I just disappeared into my book.

Not everyone looked happy to be on vacation. People were literally running the path to the beach, not because they were excited to get to the sea, but because they were worried about finding a place. I wanted to scream - There's enough beach for everyone! Once they got to the beach they eyed up the other beach goers with unfriendly looks. When new holidaymakers arrived, they told them to move on, there's not enough room. People! We're on vacation. Smile at each other. Enjoy yourselves. Enjoy the (fleeting) sunshine.

One gentleman behind the next parawan was thought to be sleeping by his family but instead required immediate medical attention. The lifeguards did their Baywatch run down the beach, and then the EMT's arrived. Nothing like a possible death on the beach to snap people into perspective and to realize that it is an amazing thing to be alive, to be on vacation, to have our little piece of the good life no matter how small it is. The man was revived, and we saw him on the beach the next day.

We stayed in a private apartment. It was located close to the Cypel and gave us easy access to the beach from both the port side of Hel and the sea side of Hel. The apartment was adorable in a kitchy kind of way. Enjoy.

We also visited some military stuff, bunkers and whatnot. I gave myself a good scare when I shined my flashlight in the prisoner's hole in a door in one of the bunkers and met the eyes of another tourist that I did not realize was already in there. A lot of the bunkers, etc. have been used as toilets by other tourists so visit at your own risk.

All of Hel is a kind of kitschy, touristy place. If you are expecting elegance, go somewhere else. If you are expecting families with kids, ice cream, fish, french fries, beach volleyball, windsurfing, kitesurfing, disco polo bars, military museums, fishing museums, boat rides, lighthouses, seals - then Hel is a good place for you. One thing we didn't find and we were looking for were t-shirts from Hel. We saw a lot of t-shirts such as - I don't need you, I have internet - Eat cupcakes for breakfast - This is my hangover t-shirt - but not even one Hel shirt. People in Hel must have a sense of humor, I mean the bus to Hel is #666. Do Polish people not buy t-shirts when they on vacation?

We're back home, and we miss it already. Now it's time to clean up all the sand we brought with us.

Here in Poland, our little Polish/American (or American/Polish if you wish) family celebrated July 4th czyli American Independence Day. It was a blast.
Truth be told, my sister is famous for her legendary 4th of July parties. Three years ago we happened to be in the States for her party, and we were not disappointed. I think the whole town was there. We stopped counting when we reached a hundred people. And the food...so good. The best part of all was the hour-long firework show thanks to my brother-in-law's completed course and certification in firework handling (?) and my father's deep pockets.
We finally found the flag that we purchased at Target last year. It was in a safe place that we couldn't remember. We also found a great fireworks store, but decided not to burn the whole village down and opted for sparklers only, so-called "zimny ognie" in Polish which translates to "cold fire".
Here's how our flag presented on the barn door. 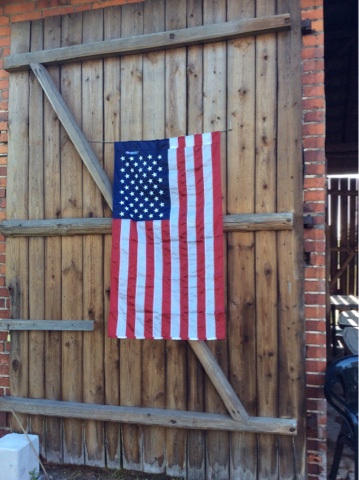 Our romantic country netting fared much worse as it was windy and wasps kept getting trapped inside. 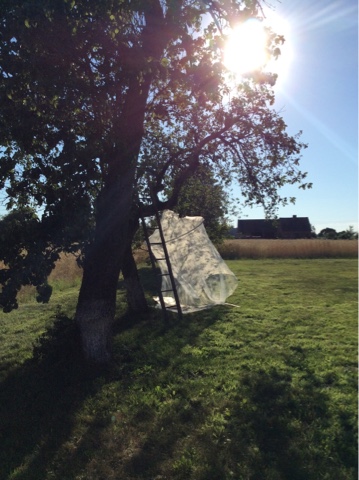 It found a new home. 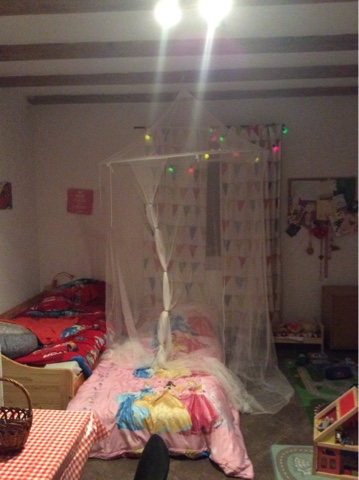 I almost forgot that before the party we hit a local flea market and came out with these great party finds. 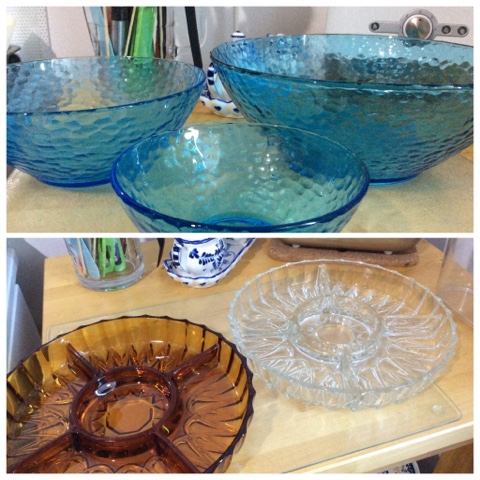 It was hot as hell yesterday so we did our best to stay cool. Some of us were chilling in the shade of the barn. 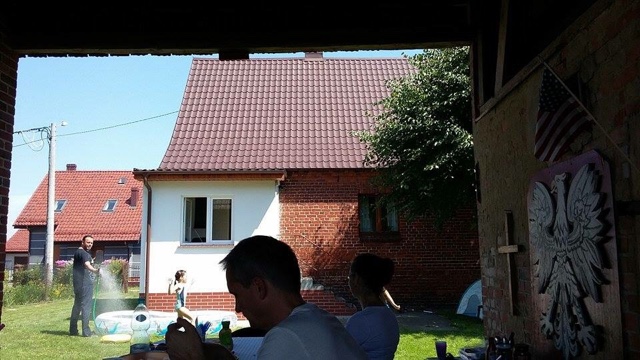 The rest of us enjoyed the low-tech fun of getting sprayed with the hose. That water's straight from the spigot in the basement, and it was c-o-l-d! 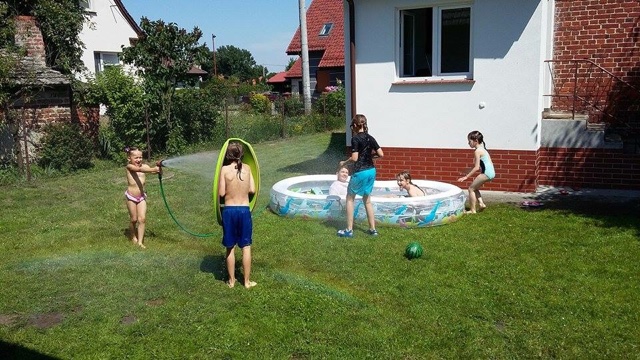 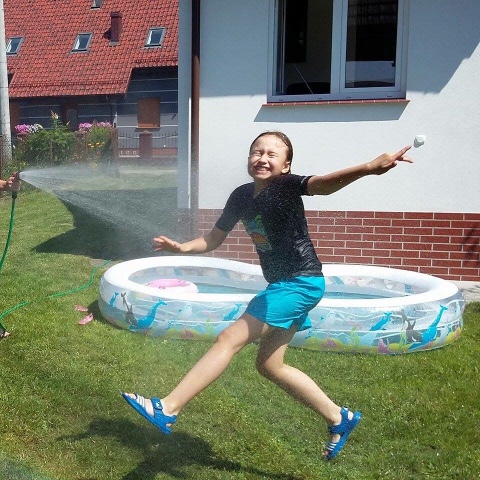 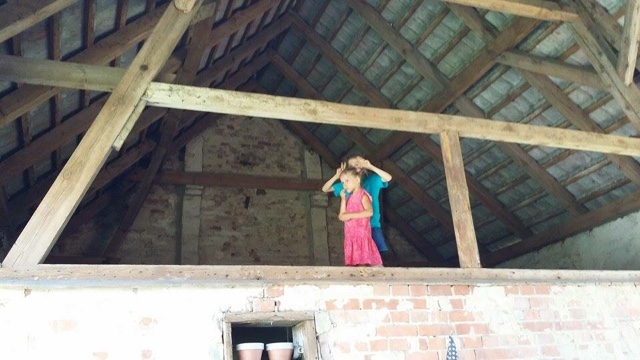 The loft in the barn is always an attraction for our little guests and for their parents a nice reminder of childhoods spent with grandparents. 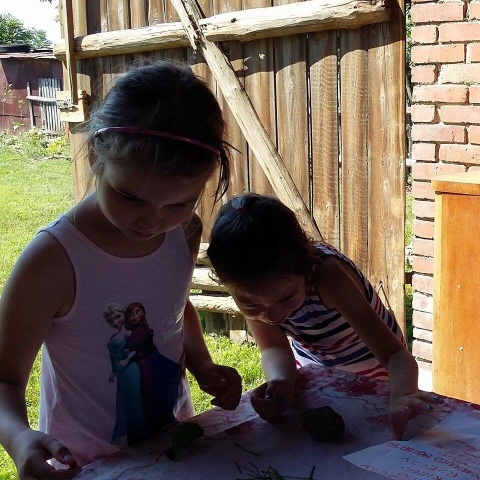 We also organized a scavenger hunt. It wasn't too complicated, but the kids' natural rivalry came out. They were running around despite the heat trying to be the first to complete their list. Here are two little ladies presenting their findings to the judge. 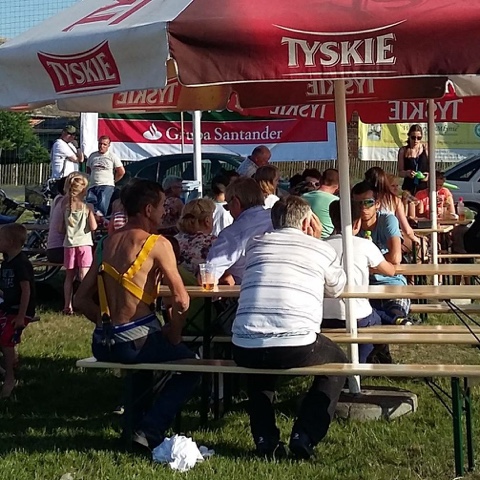 Our village had a small festival as well. There was no occasion. I suppose our local municipality got some money and had to use it up. Or I can pretend that it was in my honor. There were games and competitions for kids, some small rides, a water curtain, popcorn, cotton candy, etc. Our girls and their guests came home with arms full of prizes. Forgive the picture above, but this man fascinated me throughout the whole festival. I don't know if it was the no-shirt and suspenders combination or the fact that he had the suspenders hitched to his jeans in the back, but hitched to his underpants in the front. Additionally these suspenders were in no way doing their job of keeping his trousers up. He deserved a prize too. 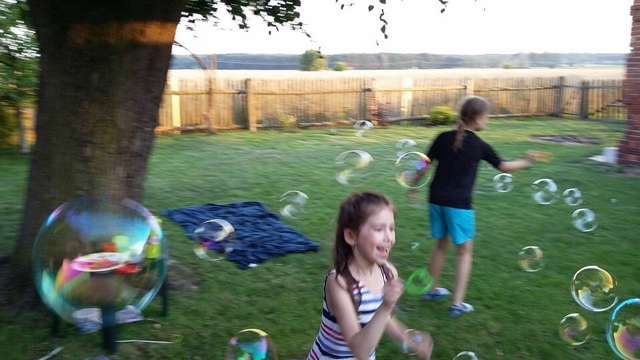 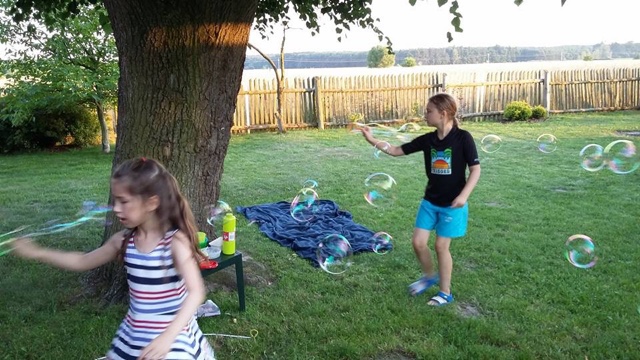 We ended the day with sparklers which I didn't catch a picture of because I was having too much sparkler fun myself and also with bubbles using my own homemade bubble concoction which worked perfectly if I do say so myself. 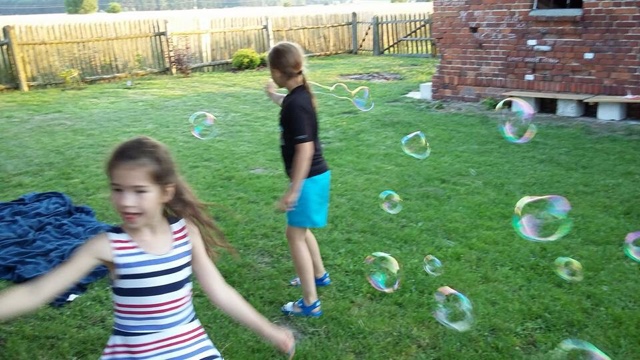 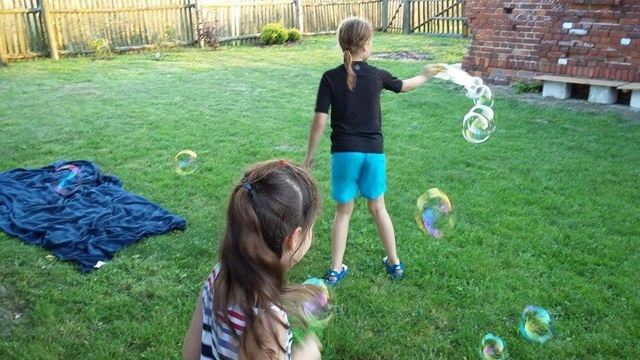 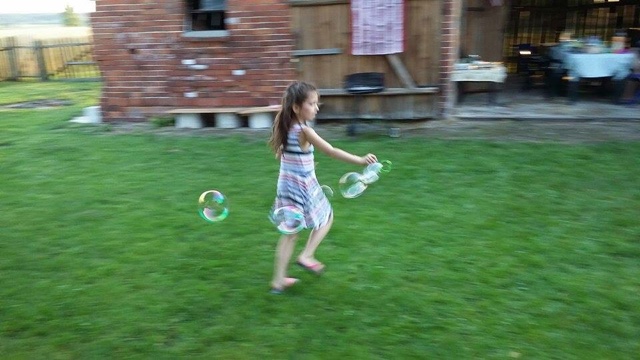 All in all, it was a great day.
Here's my very imprecise recipe for bubble mix:
I mixed everything in a big jar of water. I added about a 1/2 cup good quality dishwashing liquid. Here in Europe "Fairy" which is "Dawn" in the States. Next I added a little 50 gram bottle of glycerin. I don't know if that is too little or too much. After that I added a teaspoon or less of baking powder. All of that was sufficient for making bubbles, but the bubbles didn't want to come off the wand, they weren't reflective, and they popped right away. Google to the rescue, I discovered I was missing a key ingredient - some kind of polymer to help the bubbles along. We found that polymer at the pharmacy in the form of Durex 2 in 1 lubricant similar to KY jelly. I added a couple of squirts only. After that the bubbles came right out of the wands, were big and colorful, and lasted a long time. My mix was a bit concentrated so I transferred it to a plastic bottle and then diluted individual portions with water.
Give it a try!
Posted by Chris at 9:40 AM 5 comments: