As Seen In Poland: Chuck Norris

Here’s Bank Zachodni WBK’s latest ad campaign featuring the one and only Chuck Norris. I haven’t seen the TV spot yet and am waiting… 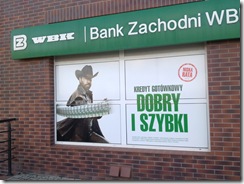 BTW, my teenage student told me that Chuck Norris didn’t come to Poland to make these ads.

Email ThisBlogThis!Share to TwitterShare to FacebookShare to Pinterest
Labels: As Seen In Poland, pics of Poland

As I waited and waited yesterday morning in a huge traffic jam near the local church, I realized that it was Ash Wednesday. Yes, Ash Wednesday is enough to jam up the traffic here in Poland.

I suppose the next church traffic jam shouldn’t be until Easter, right?

What to give up for Lent?

Can you give up hope for Lent ;)

Catch this previous post about my view of Lent as a child.

Donut Day (czyli Fat Thursday) has come and gone. I suppose I can start my diet now – or tomorrow – or better yet, Monday! But before that let’s first review the donut damage. Despite the many, many donuts placed practically right under my nose yesterday, I consumed only 4 (tylko 4, albo aż 4 depending on your perspective). They were all glazed and filled with rose jam. Scratch that, one was definitely de-glazed by Rosie before it got to my plate. 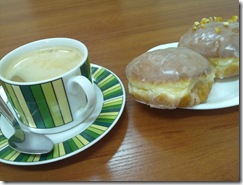 The best donut had to be the first one in the morning. It was my favorite kind – delivered to me with a cup of coffee by a pretty lady and then getting paid to eat it. Even without all the fanfare, it was still the best of the day. It was fresh, not too dark and still warm from the bakery.

The next donut was also delivered by a pretty lady (a different pretty lady) with a cup of coffee and I was paid to eat it. The whole set up was a bit too elegant for me though. It’s just a donut after all. I got my coffee and donut on the good office “guest” china. I had a choice of 3 donuts – glazed with jam, powdered sugar with jam or glazed with adwokat. These donuts were really big but not domed like the other ones. And the jam wasn’t jammy. It was like fruit filling from a can. Anyhow, I tried to eat my donut as elegantly as a donut can be eaten with minimal lip-smacking and finger-licking. Prezes ate 3 donuts and in what has now become a tradition, told the secretaries that I ate them. Truly a mature and elegant way to behave – quite befitting for a president of a large corporation. And in all this elegance, I couldn’t stop myself from laughing when Prezes took a huge bite out of his first of 3 donuts and a big dollop of rose filling plunked down onto his suit trousers. I know it is soooo mature of me, but I was stricken with a case of the giggles and couldn’t stop. Luckily for me, Prezes has a good sense of humor and he got a good laugh out of it himself.

After that I refused the next few donuts offered me and waited to eat the donuts Misiu had bought. Unfortunately, they were the type I don’t really like (glaze overload and dark) so I had to eat 2 of them ;) And just as I was turning to tell Misiu about how Prezes ruined his trousers….you guessed it, Misiu dropped a dollop of jam from his damn communist bastard donut.

previous Fat Thursday posts can be found here and here.

Nothing special going on at our house for St. Valentine’s Day. Come on, I forgot our wedding anniversary in December and called my mother on my sister’s birthday and vice versa. Got a lot on my plate, but I am wearing red lipstick in honor of the day. 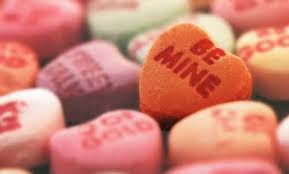 When I was a child, Valentine’s Day meant preparing cards for everyone in my class and also preparing a special shoe box/mail box where Valentines could be delivered to me. Then we had a little party with juice and cupcakes and opened our cards. I wonder if that’s what the kids still do for Valentine’s Day in the US?

My kids dressed up in red and pink as was requested by their teachers. I wonder what their Valentine’s Day celebration looks like today? I guess I will find out later.

I remember my first Valentine’s Day in Poland. It was back before Valentine’s Day was really celebrated over here. I got a card from Misiu. It was sweet. Misiu got a mountain of cards from the many teen-aged girls that he taught. One girl was brave and signed the card “Damn. I wish I was your lover.” Kind of brave for 16, don’t you think?

According to my father.

How quaint it is, he thinks, to not have enough money to make ends meet. How utterly charming it is to work and work and work and to not buy what you need when you need it because you just cannot afford it. It is just pat-you-on-the-head adorable to lose a big contract and not know when or if another one is coming along. It is all a rebellion, you see. A rebellion against America, against capitalism, against my parents, it is anti-globalist even, my conscious decision to be poor.

I have explained, blue-in-the-face explained, to my father that there is poor and there is poor. By Polish standards, I am normal as in SNAFU-normal, but still with my head above water -well, actually slightly below water but I’m not down for the count yet. By American (my father’s) standards, we are poor but by global standards we are lucky. We are not poor as in live-in-a-cardboard-shack poor but that doesn’t help me when all I want to do is…oh, never mind, it’s really not that important. Four tickets to the US cost about 12,000+ PLN. Bleh.

Email ThisBlogThis!Share to TwitterShare to FacebookShare to Pinterest
Labels: me

As I am planning a trip to the USA sometime in the near future (my definition of near future is within the next 5 years), I have been thinking about what I should pack and what I should bring back. Here’s what I have come up with:

As little as possible.

What to bring back?

As little as possible.

But that didn’t use to be the case. I mean I always packed light for the trip to the US, my baggage usually consisting of an empty bag inside another empty bag. Then I loaded up in the US on clothes, shoes, cosmetics, everything. The stuff was better and it was way cheaper. Not anymore. We’ve got stuff in Poland too, sometimes too much stuff and sometimes it is even good stuff.

I will no longer stock up on clothes in the US. I will probably buy something if I like it or need it but it won’t be because they don’t have any good clothes in Poland. That doesn’t go for Misiu who will probably do what he always does – go to the Gap and buy out all the flat front khaki pants in his size. Shoes are still generally cheaper in the US as are cosmetics, but not enough to warrant “stocking up”.

In the past when we used to go to the States more often, friends and not-so-friendly friends upon hearing of our upcoming trip would promptly present their wish-lists for things we should buy for them while in the US. The things on the lists ranged from make-up, medicine, vitamins, and clothes all the way to CDs and electronics. Sometimes it was because the things were cheaper in the US and the rest because they were “better”. My old boss was crazy about “better” stuff in America and I had to bring back Centrum Vitamins for him and his whole family even though we have Centrum Vitamins here in Poland and they are made in America. (OK, they are 5 times cheaper in America but that wasn’t point).

One of my students wanted Levi’s from the US and begged me to bring him a pair. I searched and searched but apparently 34/36 is a very hard size to come by. (36/30 on the other hand is a piece of cake to find) The best ever was a former student who emailed and asked me to buy him a laptop. He found it on-line at a shop just a few hours (!!!) from my home. He’d pay me when I got back to Poland. Yeah, right.

There is one student that I always accommodate while in the States. When he wants something, he asks me if I would bring it. Then he buys it on-line and ships it to my parents. I unpack it, tuck it into my bag and deliver it here in Poland. If it is something large or valuable (that the company will not ship directly to Poland) I unpack the bill, re-pack the box and post it to Poland sometimes to myself as a gift (because of taxes, duties, whatever). I always get a “thank you”, reimbursement for the postage and usually some little gift. It’s nice. Except the one time I forgot to tell my parents that a package was on the way…and that my student has a very terrorist-y sounding name. The bomb squad was not called and it all worked out in the end.

When Misiu and I got married, we asked our guests not to give us gifts. We wanted to be cool with our guests and not strain their budgets so close to Christmas. They understood that Misiu’s new American wife didn’t want any of their shitty Polish wedding gifts. That wasn’t the case but whatever… water under the bridge. My sister-in-law had been working in Germany around that time and the next time she was in town she “gifted” us with a couple of bags of washing powder…from Germany. I found that to be an odd gift but since I was using Dosia (quite possibly the worst washing powder ever) I was pleased with the gift. Only later did I find out the Polish people are 100% sure that German washing powder is better…even today. Check out the ad at our local kiosk. “Original detergents from Germany. The largest selection around.” 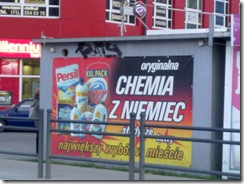